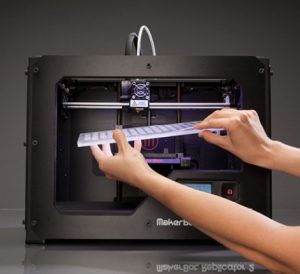 In mid-June, Stratasys announced the details of a merger which allowed them to acquire upstart 3D printer company MakerBot.  MakerBot is known for primarily targeting the 3D printing hobbyist niche, although the charismatic CEO Bre Pettis has become well known thoughout the 3D printing industry.  Industry experts applauded the move by Stratasys as an essential step to solidifying their control of the 3D printing marketplace as MakerBot was starting become a real competitor with Stratasys and Z Corp.

The Details of the Deal

Stratasys purchased MakerBot entirely in Stratasys stock.  The initial acquisition price is more than 4.75 million shares.  In total, the shares are valued at more than $403 million.  There is also an opportunity for MakerBot to gain an additional 2.38 million shares.  In total, the value of the stocks could reach as high as $604 million.  Considering MakerBot’s revenue was only $11.5 million during the first quarter of 2013, the $604 million valuation is a larger than normal valuation.  At the same time, it was considered by industry experts to be a necessary expense for Stratasys as MakerBot 3D printers would starting to outperform Stratasys 3D printers and were sold at a fraction of the cost.

Why This Merger Was a Critical Strategic Move for Stratasys

Even with the higher than normal valuation, this was an excellent strategic move by Stratasys on several fronts.  The most obvious benefit is Stratasys now has one less competitor in the 3D printing marketplace.  While Stratasys primarily targets industrial and manufacturing clients and MakerBot focusses on hobbyists, there is no doubt a direct confrontation was in the marking.  The most recent side-by-side comparisons show the Replicator 2 (created by MakerBot) outperformed the Mojo (Stratasys’s cheapest 3D printer) on every front.  This is even more impressive considering the Replicator 2 carries a price tag of only $2,200 while the Mojo sold for $10,000.

Another benefit is Stratasys can leverage the technological advancements and user-friendly conveniences implemented by MakerBot to improve their own products.  This will make it easier for them to continue capturing a larger share of the industrial and manufacturing marketplace.  Plus, there is no doubt MakerBot would have eventually started competing for the same target audience as Stratasys as newer generations of 3D printers were designed to handle a larger workload.

How Does the Merger Impact the Emerging 3D Printing Marketing?

On hand, this merger does very little impact the current 3D printing landscape.  MakerBot will operate as a subsidiary which will allows them to maintain some sort of independence.  The risk of undermining the open-source community surrounding their 3D printers is minimal.  If anything, MakerBot will now have more resources to completely saturate the hobbyist 3D printing market.  As for the future of 3D printing, it is hard to argue that Stratasys hasn’t taken a necessary step to ensure their long-term control of the overall marketplace.  Not only can they compete on an industrial scale, but now have a way to leverage the quickly expanding hobbyist market.  Considering how good MakerBot is at quickly identifying, improving, and implementing new solutions at a low cost Stratasys may be able to streamline their own operations to decrease costs and improve margins while simultaneously improving their own products.

link to How The Micro 3D Printer Is Changing The Game

The world of 3D printing has opened up a lot of new opportunities for designers and producers. For example, 3D printing makes it much easier to develop and test prototypes before committing to...

In 2013 one of the most popular categories in the crowd funding realm was 3D printing. 3D printing can be found at the heart of many of the top funded boards across popular crowd sourcing websites....

Certain content that appears on this site comes from Amazon Services LLC. This content is provided 'as is' and is subject to change or removal at any time.